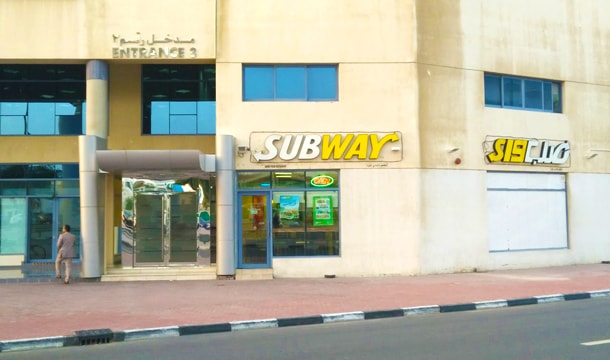 Someday I had the silly idea to go to Subway, to grab one of their sandwich, 600gms of fat only per mouthful.

Everything goes well for my Italian BMT on his journey from cutting to toasting and topping. It’s the perfect sandwich. I art directed the creation of an epic pre-made piece which I added salt and pepper and tasteless veggies to. Then comes the moment I have to pay for their help in the process. I haven’t known a Subway store in Dubai that had reached the age of credit card, so I pay with decent small bills.

But still, the iron age cashier, who refuses cards with convictions, do not have change and is forced to let me go with 1dh of theirs (or his, miskeen), or other solution was for me to give it to a multinational company of fast food that kills people all around the world. Impossible, I have convictions too. We start arguing. He’s attacking me on the fact that I don’t carry fucking coins to pay for a sandwich, and me to kindly let him know that first he works at Subway so shut the fuck up bitch, and second that he’s the one running a business here, not me, so if someone should have fucking coins for giving change, it’s more in his cashier side.

The Filinazipino tells me while I’m leaving: “Okray okray Sir Mam Sir, Mam Sir, Sir next time you come you give it back to us.”
I didn’t go back for 6 months. Earned a dirham. Fuck yeah. Fuck Subway.