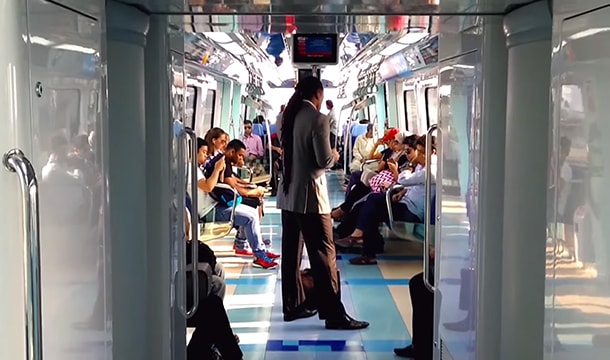 This is the ticket of my life. I have wanted to write this forever since I arrive in Dubai.

Mrs Filipinas and Mr Indians (ethnic targeted post), you probably don’t have public transportation in your country (or water for some of you, miskeen), but even by the dumbest principles of physics, it’s common knowledge, a human patrimonium of good sense, to have to empty a filled up container before putting something else in it.

Yes, I’m talking about trains and lifts. Let’s break it down because those two have different misusage.

In the metro, people have to wait on the side to let people go out. It can’t be said simpler, and it’s written on the floor with beautiful stickers you’re stepping on right now and completely ignoring. How do you expect to be able to run like a retard after a seat like a Somali after a bag of rice, if you don’t let people leaving these holy seats get out of the metro beforehand?

In the lifts, OMG. Special shout out to my Filipinas out there. Ladies, you rush like there is some rich white guy to marry in this lift, and cut the line (a line is where people wait) to get in first and find your promise to a better life. Thing is, once you notice no one is there for you, why in hell, your Christian God WHY are you staying at the entrance of the elevator blocking the way for people coming in?

Is she that important of a person that people have to salute and touch her flabby flesh to be granted a lift ride by her majesty Queen Pinoy the first? (by the way, you overpassed the white guy you wanted to marry, he was patiently waiting in the line; he took the stairs when he saw you acting like a douche).